A starry soprano lights up Fort Worth Opera’s “La traviata”

When the Fort Worth Opera House opened 76 years ago, it did so with Verdi The traviata, a chilling tragedy of devotion and sacrifice. So it’s only fitting that the company presents the same opera – in a lighter version – for its first production at the Bass Performance Hall since 2019.

At Friday’s performance, patrons seemed visibly delighted to hear the opera again in the Bass Hall. They were treated to beautiful vocals, but the production offered mixed results.

From 2001 to 2017, under the direction of Darren K. Woods, Fort Worth Opera’s general manager captured national attention with sometimes provocative new operas and a new spring festival format. Woods was fired when he and the board disagreed on the company’s future.

Under two successive chief executives, currently Afton Battle, with the added challenge of COVID-19 in recent years, the company has struggled to find an identity. Until traviatathe only production staged this season, in January, was a stripped-down world premiere by Héctor Armienta Zorro.

Lasting approximately two hours, without intermission, the Fort Worth Opera traviata uses standard cuts, as well as pinches and pleats here and there. The Opera originally set in Paris in the 1850s, but director John de los Santos brings the action to modern times. Ashley Soliman’s bright costumes suggest the 1980s, but I don’t think Violetta – a woman kept for the upper classes – would be caught dead in a teal mermaid dress.

Liliana Duque Piñeiro’s sets feature grand staircases, a balcony and a chandelier. The trellis work of the stairs sounds nice, but it’s distracting to hear the stairs creak as the singers go up and down. In a cliche gesture, an image of the Eiffel Tower appears as a backdrop in the second act. Yes, it’s Paris!

De los Santos sometimes overdoes it in his direction. It is unconvincing to see the singers walk slowly and then suddenly fall in the opening prelude. And some party scenes seem too busy.

Other decisions were more convincing. In the end, Violetta dies of tuberculosis, usually collapsing on or near a bed or couch. But here she climbs a flight of stairs, probably representing her celestial ascent. The symbolism may be stark, but I found it moving nonetheless.

Soprano Elaine Alvarez totally embodied Violetta. She expressed Violetta’s hopes with poignant lyricism in thoughtful passages. In duet with Alfredo, her ardent lover, she unleashes a white-hot vocalism, growling when she defies his will.

Exploring a wide range of tonal colors, she formulated melodies eloquently, incorporating trills and flowing seamlessly into her lines. She provided the most jaw-dropping moments of the evening in tunes that sent shivers down your spine.

Alvarez shared great chemistry with tenor Nathan Granner, voicing Alfredo. Together, they made their relationship natural and believable, drawing the audience into the story.

Granner made full use of his robust tenor, passionately conveying Alfredo’s desires or showing his more delicate side. But the high notes sometimes sounded strained.

As Alfredo’s father, Kenneth Overton brought a powerful baritone that tended to thin out high. His playing was often static and he fooled no one with his gray wig and fake hair.

Fort Worth Opera Artistic Director Joe Illick skillfully coordinated the members of the Fort Worth Symphony Orchestra with the singers, even during dramatic downturns. He makes the orchestra play alternately with committed urgency and elegant lyricism. But intonation issues hampered the strings later in the performance, and some fast sections could have been more effective a notch faster.

The choral contributions, prepared by Alfrelynn Roberts, were never less than competent. Chad R. Jung’s lighting helped create emotional atmospheres. The surtitles have been judiciously displayed in English and Spanish. 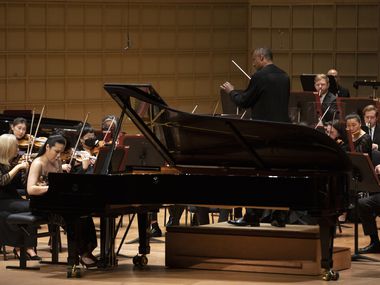