The orchestra is called Mriya, the Ukrainian word for “dream” — because its musicians dreamed of making music despite the war. It was created in March by Ukrainians who fled their country of origin and since then more than 30 musicians have joined.

Margaryta Grynyvetska is one of its newest members. The conductor of the National Academic Opera and Ballet Theater in Odessa fled as soon as the Russian invasion of Ukraine began. She met two friends to create music together. “I never imagined our first meeting would be on a big stage like the Berlin Philharmonic,” she told DW.

On May 10, the Mriya Orchestra takes the stage with a mixed program of German classics and Ukrainian contemporaries at the Berlin Concert Hall.

Work with a large network

Supported by funding from the aid organization Alliance4Ukrainethe orchestra pays tribute to those who defend Ukraine and help people leave their war-torn country.

The musicians also collaborate with the Berlin Philharmonic to create work opportunities for Ukrainian professional artists.

When it comes to finding accommodation, looking for rehearsal rooms or concert venues, the Hamburg-based organization Culture Connects, founded in 2018, offers concrete help. Roman Ohem, president of the association, has been organizing chamber concerts with Ukrainian musicians in Germany for seven years. With the help of his cellist friend Lev Kucher, he created the website Mriya.de.

“To me, this is all very personal,” Ohem said. “We simply created a list of professional musicians fleeing Ukraine thanks to our contacts. They registered with the aim of helping them.”

Roman Ohem was involved with musicians even during the Syrian war and also helped as a violinist in the Syrian exile orchestra. “In this way, musicians can flourish and are free,” he says. The playbook, program and rehearsal plans are all created by the musicians themselves. 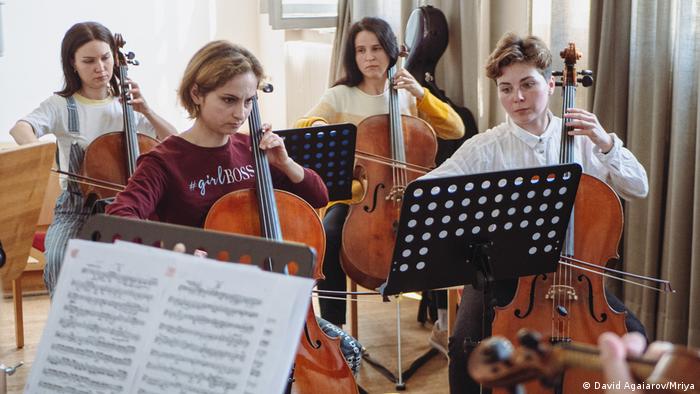 Rehearsal for the concert

Everyone who plays Mriya – the men also participated – worked as professional musicians in their country.

The founder of the orchestra is the famous violist Kateryna Suprun. Hanna Tsurkan, solo violinist for Ukrainian composer Myroslav Skoryk’s “Rhapsody of the Carpathians”, has won prizes in several international competitions and is a member of the National Symphony Orchestra of Ukraine. Prior to her time as a conductor in Odessa, Margaryta Grynyvetska also worked with the famous conductor Oksana Lyniv, with the Bayerische Staatsoper in Munich and also in Luxor, Egypt.

The program for the May 10 concert at the Berlin Philharmonic includes the Concerto for Two Pianos in E flat major (Piano Concerto No. 10) by Wolfgang Amadeus Mozart, performed by Ukrainian star pianist Kateryna Titova and fellow prize-winner, pianist Artem Yasynskyy.

The famous Violin Concerto in A minor by Johann Sebastian Bach is also presented. The orchestra also plays music by contemporary composers, including Valentyn Silvestrov. His work “Silent Music” is currently being performed at several concerts in Germany.

The composer Myroslav Skoryk, whose work is also part of the program, is also appreciated for his compositions for string orchestra. For Margaryta Grynyvetska, playing music from her home country is a very emotional affair. She noticed this during a concert she was conducting in the Lithuanian capital of Vilnius: “I was on the verge of tears when I realized that our life, which we had in Ukraine, would never be the same again. “, she said. “I don’t know when I will return to my beloved Odessa, to my house, my home. That’s why it’s very important for us to play this music, to have this connection with our country.”

The orchestra consists mainly of violinists and wind instrumentalists. Men only appear for a short time, says Margaryta Grynyvetska. “All men are now soldiers if we fight on the cultural front, so to speak. That is our task.”

Roman Ohem is now advocating for male musicians to get an extraordinary permit to leave Ukraine, but it’s difficult. “They can only leave the country if their musical work abroad is more useful than the use of weapons.” This is the only reason to allow overseas travel for male musicians.

Meanwhile, in Germany, Margaryta Grynyvetska often feels that the war in Ukraine has already become normal. “That’s why it’s important for us to show that the war is a serious situation and that Ukrainians desperately need help and support,” she says.

Anyone who thinks Ukrainian musicians can play in theaters for free is wrong, says Roman Ohem. “We are paying €11,000 in rent at the Philharmonie. There is no discount and I personally took out a loan of €11,000 with my German account and the association.”

His modest stipend, which he received as a freelance artist during the pandemic, was also donated to aid projects. “Our concerts are 100% charitable, which means that whatever is left over immediately goes to Ukraine.” The concert of the Berlin Philharmonic is, among others, supported by the German orchestra foundation, the Deutsche Orchester-Stiftung. Profits are used for medical aid to war victims. For Ukrainian spectators, the event is also free.

This article was originally written in German.