Remembering Plato Karayanis, who led the Dallas Opera for 23 years of transformation

Plato Karayanis, who led the Dallas Opera for 23 years of transformation, died April 29 at his home in Santa Fe, NM

An outgoing man whose sonorous baritone betrayed his beginnings as a singer, Karayanis presided over the founding of the opera company’s orchestra and the creation of its vast rehearsal and costume center, which the board named in his honour.

Founded in 1957 by businessman/impresario Larry Kelly and conductor Nicola Rescigno, the Dallas Opera House was a two-man operation in its early days, and often financially precarious. After Kelly’s untimely death in 1974, Rescigno attempted to handle both artistic and business affairs until the board hired Karayanis as general manager.

Karayanis brought his experience as a professional singer, director and administrator. He studied voice at Carnegie-Mellon University in his hometown of Pittsburgh and opera at the Curtis Institute of Music in Philadelphia. For six years in Europe, he studied opera administration and production at the Hamburg State Opera, while singing various baritone roles and directing.

Returning to the United States in 1964, he successively held administrative positions at the San Francisco Opera; the Metropolitan Opera National company, a second short-lived touring operation; and Affiliate Artists, a New York nonprofit that has funded musicians in performances and residencies across the country.

By the time Karayanis arrived, the economics of the opera industry were changing, and it was harder – and much more expensive – to book opera’s top stars. Under new constraints, Karayanis brought a new type of professional management to the company and a more collaborative work ethic.

“He was very good at surrounding himself with very good people and letting them do their job,” said Jonathan Pell, hired by Karayanis in 1985 to help with artistic administration, eventually named artistic director.

“Plato was very supportive, very helpful, and he was very good at managing the people who worked with him and keeping them at their highest level.” But Karayanis and Rescigno eventually locked horns, and the 74-year-old bandleader quit in 1990.

The Dallas Symphony Orchestra performed for the Dallas Opera until the 1989 opening of the Meyerson Symphony Center, when the DSO wanted to schedule concerts during opera seasons. Karayanis presided over the creation of the separate Dallas Opera Orchestra and the 1994 hiring of Graeme Jenkins as the company’s musical director and conductor.

“He did it while nurturing the vision – ‘preparing the ground’, if you will – for a world-class opera house in Dallas’ arts district,” said Dallas entrepreneur and patron John Dayton, former chairman of the board of directors of TDO. The Winspear Opera House opened in 2009.

“Plato was an accomplished impresario,” Dayton said, adding, “Plato was quintessentially Greek: a flair for fashion, good wine and good food, and also a passion for his bright orange vintage BMW.”

From 1993 to 1997 Karayanis served as chairman of the board of the national service organization Opera America. After retiring from the Dallas Opera in 2000, he held acting directorships at the Palm Beach Opera and the San Antonio Opera.

Karayanis is survived by his wife, Dorothy, and their extended family. No memorial project has yet been announced. 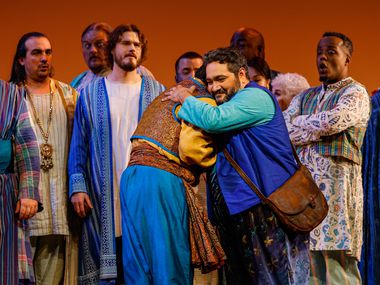