“Andrea Senier”: The emblematic opera of dazzling musical power opens in 2022 for ELS

From January 20 and for 7 performances in the Stavros Niarchos room of the SNFCC, under the musical direction of Philip Ogen and staging – sets – costumes by Nikos Petropoulos. The main roles are played by internationally renowned protagonists, such as Marcelo Puente, Marcelo Alvarez, Celia Costa, Eva-Maria Westbrook, Dimitris Platanias, Yeltsin Azizov. The production is implemented with the support of a donation from the Stavros Niarchos Foundation (ISN) [www.SNF.org] for the creation of the National Opera’s anniversary program for 200 years since the Greek Revolution of 1821.

The opera refers to the life of the famous French poet André Senier (1762-1794). In 1789, in aristocratic circles in Paris, Senier supported the Revolution and joined Gérard in the revolutionary movement. Gérard, servant of the aristocrats, becomes their figurehead Without–cullots (Avrakots, who wore pants, unlike the aristocrats who wore pants), people from the lower classes of the bourgeoisie who actively participated in the political arena of the Revolution. However, love for the same woman turns the friendship of the two men into envy. Three years later, when Senier was arrested as a conspirator against the Revolution, Gérard wrote his sentence. Although later Gérard, realizing his mistake, will try to free the poet, his attempt will be in vain and Senier will be led to the guillotine.

In the highly aesthetic production of the eminent director and set designer Nikos Petropoulos (the comeback Ion Kesoulis) the sets and costumes reflect the historical environment in which the play takes place. The production will be directed by the chief musician Philippe Eugene, to a former musical director of State Washington Opera, who studied in Vienna and Florence and staged some of the most important operas, such as in Vienna, Milan, New York, London, but also at the Salzburg Festival.

The main performers of international influence.

The tenor Marcelo puente, who will play the title role in the first cast, has already charted an impressive career in major lyric theaters playing the leading roles. International audiences first met him when he performed the role of Pinkerton with great success at the Royal Opera House in London under the baton of Antonio Pappano. Outside of London, he has performed at the National Opera in Paris, the German Opera in Berlin, La Scala in Milan, opera houses in Hamburg, Brussels, Toronto, Prague, Zurich and more. 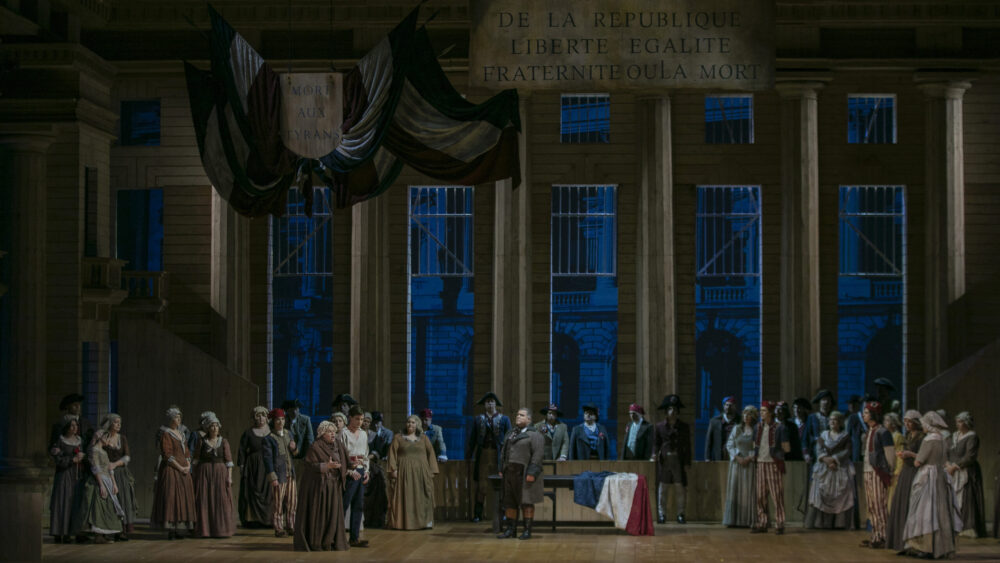 In the second cast we will have the opportunity to see and hear the unique tenor Marcelo alvarez, who has performed in the greatest theaters in the world such as the Metropolitan Opera in New York, the Royal Opera House in London, the Paris National Opera, the Vienna State Opera, the Real Madrid Theater, La Scala de Milan etc. His repertoire includes famous roles from belcado to French operas and works of verisimilitude. He has collaborated with eminent chief musicians, while his discography includes more than thirty recordings at companies such as Sony and Decca.

The main Greek baritone Dimitris Platanias will play the role of Gérard, two years after the enormous success he had in his production Andrea Senier of the Royal Opera House in London, reaffirming its artistic displacement. In the second cast, Gérard will be played by the Azerbaijani baritone Yeltsin Azizov, who has become artistically virile to together of the Bolshoi, and since 2015 has participated in numerous productions of the Metropolitan Opera in New York.

In the role of Mandalena we meet in the first cast the distinguished, with an international career, soprano of ELS Celia Costea. Kostea made her successful debut as Mandalena in 2019 in two major French operas, the Toulon Opera and the Nice Opera.

His debut at the National Opera will make him one of the most important sopranos and with great international recognition, the Eva-Maria Westbrook, in the second cast of the role of Mandalana. Westbrook has performed in the biggest theaters and festivals on the planet, from Beirut and Aix-en-Provence to the Metropolitan, London, Paris, Vienna, Scala, Munich, Berlin, etc., collaborating with the best orchestras in the world , under the baton of the most important conductors of our time, while it has been directed by great directors.

O composer. Born in 1867 in Foggia, in the south of Italy, Uberto Giordano studied at the Conservatory of Naples. In 1890 his solo opera Marina did not win the Sonsonio Publishing House Young Composers competition, but generated enough interest to be Bad life (1892), which met with great success in Rome, Naples, Vienna, Berlin and Milan. In 1896 its presentation Andrea Senier at La Scala in Milan made Giordano famous and two years later the Fentora with Enrico Caruso made him rich. Giordano died in Milan in 1948 at the age of 81.

The game. Drama in a historical setting, opera Andrea Senier focuses on the last years of the life of the poet André Senier.

First. ?? Andrea Senier premiered at La Scala in Milan on March 28, 1896 with great success. The main roles were played by stars of the time. From the National Opera, which began its activity in 1940, the Andrea Senier first performed on March 13, 1965 at the Olympia Theater.

Through Orchestra, The Choral and members of the ELS Ballet

According to the instructions of the Hellenic State, it should be noted that the ELS rooms at the SNFCC function as pure spaces for vaccinated and sick people, at 100% of their capacity (spectators must present a certificate and a piece of valid identity or passport). For children from 4 to 17 years old, the demonstration of a vaccination or illness certificate, or a declaration of a negative self-test (self-test) of the last 24 hours is valid.