In recent times, the appearance of Beethoven’s Ninth Symphony often signals something historic or monumental. Many of us still remember that extraordinary concert in Berlin in December 1989 marking the reunification of Germany, when Leonard Bernstein replaced the word freude (joy) with Freiheit (freedom).

The “hunk” of the Ninth – The Ode to Joy – has to be the most famous melody on the planet. It can be heard everywhere, from advertisements to world sporting events, in toys, as ringtones and even on the International Space Station. Too bad old Ludwig only gave it a short burst in the chorale finale of the Ninth.

Here in Australia, the opening (and re-opening) of our major cultural centers were all celebrated with a performance of the Ninth, from Adelaide and Sydney in 1973, to Melbourne and Brisbane soon after. Orchestras often present their recently installed conductors with a performance of the Ninth. It is relatively rare for it to appear in the body of a season without an immediately apparent festive connotation.

Chinese-American conductor Xian Zhang has been named the OSM’s Principal Guest Conductor for 2020, following her successful Melbourne debut two years earlier conducting Dvorak’s Symphony No. 9, From the New World (this other Ninth!). Born in Dandong in the Chinese province of Liaoning, Zhang enjoyed a meteoric rise to fame in Wales, Italy and the United States. She is in her sixth season as musical director of the New Jersey Symphony Orchestra, where her contract extends until 2027-28, and in her fourth season with the OSM.

This week, Melbourne audiences saw Zhang’s true colors tackle Beethoven’s Ninth and she was, in a word, sensational. On the conductor’s podium, Zhang is dynamic, explosive and exciting. She even remembers the energy of a young Bernstein, and one wonders if it is not pure coincidence that in 2002 she was named one of the assistant conductors of the New York Philharmonic. Three years later, Lorin Maazel appointed her associate conductor of the Philharmonic Orchestra.

Zhang has proven to have complete command of Beethoven’s score. For the first time, I began to understand the heavy architecture of the choral finale, as it drove these disparate elements – Presto, Allegro molto assai (Alla marcia), Presto – to a resounding and utterly satisfying conclusion. The orchestra responded to her every nuance—every arm movement, the flick of her fingers, and the flash of a smile—with unanimity and immediacy. The rich, velvety tone of seven double basses was mesmerizing. 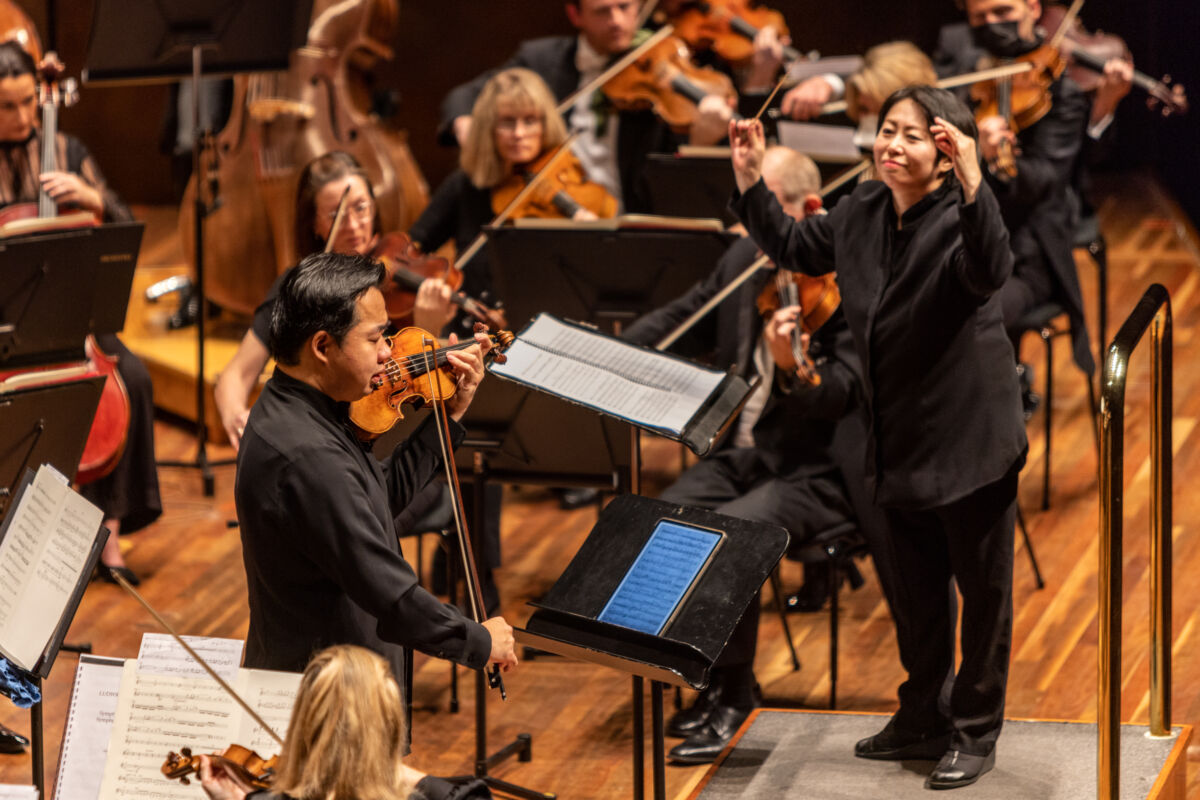 The 78-member MSO Chorus, coached by Michael Fulcher, wasn’t as exciting. Sitting in the center of the stalls, I was unsure if their positioning created a cohesive and compelling choral sound, with the ladies on the balconies above either side of the stage and the gentlemen standing behind the orchestra. The four vocal soloists – soprano Madeleine Pierard, mezzo-soprano Ashlyn Tymms, tenor Rosario la Spina and bass Nathan Berg – sounded great and their delivery was almost lyrical in character.

Overall, it was a performance of Beethoven’s Ninth, of which the OSM can be proud. It required no context other than the fact that it was good to celebrate another refreshed and electrically charged performance that will be remembered for a long time.

At the same time, it would be hard to imagine a greater contrast between the two works in this program. The monumental majesty of the Ninth has totally overwhelmed the presence and memory of the harmless violin concerto that precedes it. Written by Zhao Jiping in 2017, it hardly tapped into the superior talents of 40-year-old soloist Ning Feng, whose honeyed tone and elegant playing were nonetheless a delight throughout.

Born in 1945, Jiping is a highly respected composer and teacher in China, where he is well known for his many film scores. Raise the Red Lantern (1991) and Farewell my concubine (1993) in particular brought him international acclaim. Given his eminence as a composer of film music, it’s no surprise that much of Jiping’s Violin Concerto No. 1 sounds like it came straight from a movie soundtrack. Copland-style open-air vistas intertwine with popular love themes, some of which may be derived from traditional Chinese folk music. At other times the composer recognizes some of the great concertos in the canon, with fairly overt references to Tchaikovsky and Sibelius and more than a passing nod to Samuel Barber.

In this Australian debut performance, bouquets to MSO harpist Yinuo Mu, who accompanied several of the mini-cadenza moments with appropriate angelic effect. Brickbeats to those disembodied voices, possibly headphones from the cameramen recording the concert, which spoiled the sweeter moments of the performance.