Freddie Mercury fans are unlikely to have been disappointed with the West Australian Symphony Orchestra. Bohemian Rhapsodies, presented at the Perth Concert Hall, despite the realization of a fantasy of another kind. The concert included a Mozart Symphony composed in Salzburg, Smetana and Janáček as representative Czech composers, and Nigel Westlake presenting the world premiere of his Trumpet Concerto.

Conductor Johannes Fritzsch opened the concert with a allegro in Mozart’s “Haffner”‘ symphony. Originally conceived as a serenade for the Haffner family, the serenade evolved into a symphony by omitting the introductory march and a minuet, and adding additional instruments to produce a fuller sound. The initial opening and bold dotted rhythms could have had more precision, but careful dynamic shading ensured musical interest.

the graceful Andante produces an intuitive set of all sections, with the Minuet and Trio offering a luminous mood change. The driving Presto the finale fulfilled Mozart’s instruction to play as fast as the players could without losing clarity. The elegance of the phrasing and the obvious contrasts throughout the work helped to achieve that feeling of contentment after listening to a well-performed Mozart work.

Commissioned by Geoff Stearn and Janet Holmes à Court, Nigel Westlake’s Trumpet Concerto was composed specifically with soloist Brent Grapes in mind. Grapes is principal trumpet of the West Australian Symphony Orchestra, and Westlake describes the concerto as a vehicle for Grapes’ extraordinary virtuosity and talents. Perth audiences are fortunately familiar with these talents, and the concerto has certainly given us ample opportunity to appreciate his impressive ease. 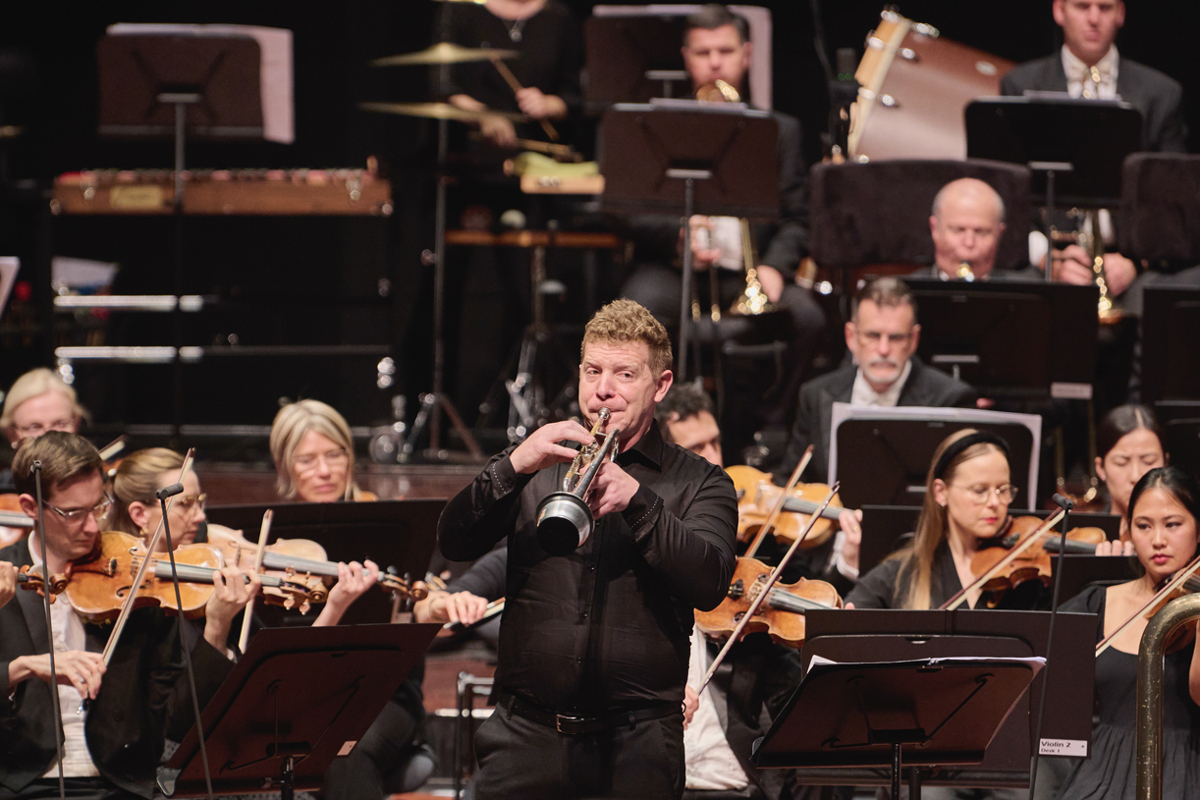 The almost imperceptible offstage Intrada – written in memory of Paul Goodchild, former principal trumpet of the Sydney Symphony Orchestra – produced a haunting feeling, before the Fanfare woke us up with heart-pounding rhythms and bubbly articulation from Grapes, complemented by lively orchestral accompaniment. The warm tone of Adagio was inspired by the Indian Ocean, with undulating dark tones, reminiscent of deep, menacing ocean shadows. The conclusion Scherzo gave a sparkling exchange between orchestra and soloist with irregular accents and catchy rhythms mastered by Fritzsch. Lyrical moments varying with percussive cross-rhythms culminated in an exhilarating and thrilling finale, with Grapes deservedly receiving an enthusiastic response from the audience.

The symphonic poem My vlast (My Homeland) was composed when Smetana was in his fifties and was slowly losing his hearing. The work is a set of six symphonic poems illustrating the countryside, history and legends of Bohemia, and is often described as a love song to the Czech nation. Although frequently performed as a whole, the popular and evocative second movement Vltava (La Moldau) was an appropriate choice in this concert of bohemian impressions. A suitably pastoral woodwind introduction set the scene before the strings meld into the familiar flowing river theme in its varied moods. Winds and brass added color as the river passed through varied landscapes and a farmer’s wedding, before swirling towards Prague. These contrasting scenes with large, rapid phrases require strong, muscular acting. The duet flutes of the Mermaid Round Dance could have benefited from greater projection, but Fritszch produced a compelling rendition of this favorite lyrical symphonic poem. 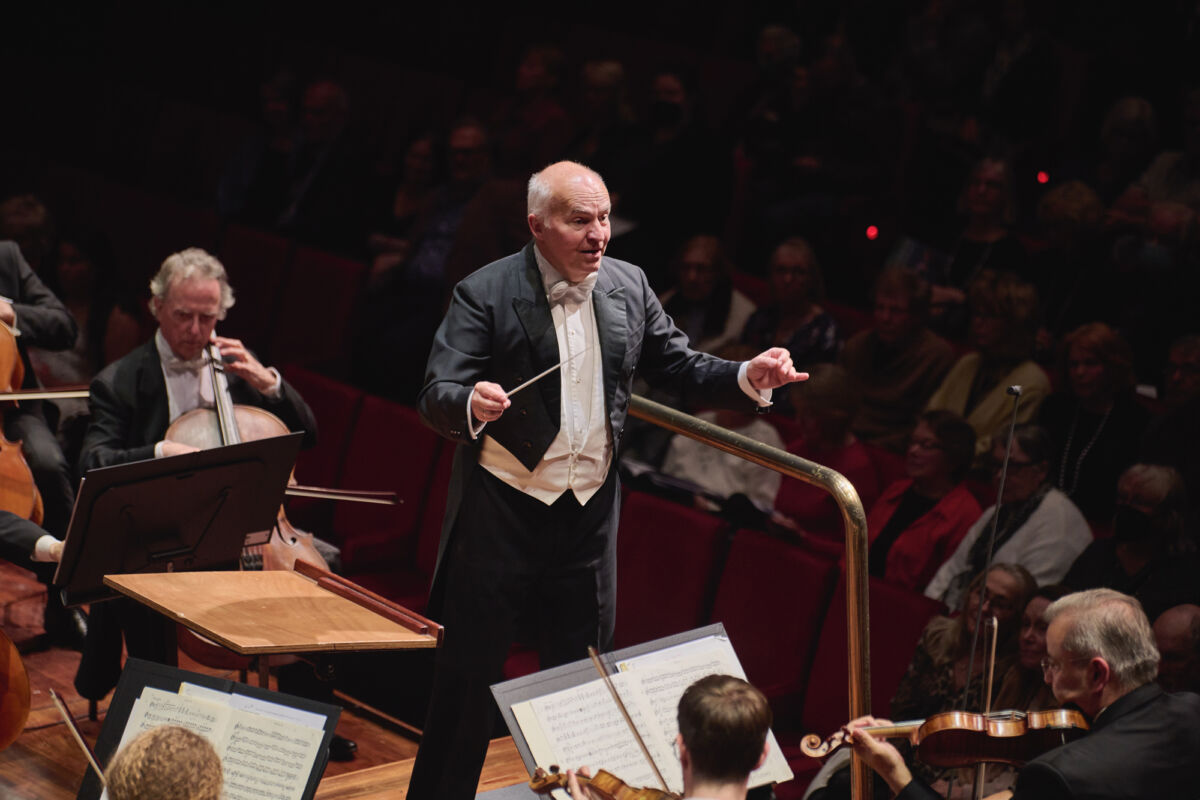 The story of Taras Bulba, the 16th century Cossack leader, is one of Janáček’s most compelling orchestral scores. Tender love scenes, battle music and gruesome deaths are clearly depicted with a plaintive romantic opening preceding the violence heard later in this movement. The English horn, violin, and oboe represented the love of Bulba’s son, Andrei, for a noble woman from the enemy nation, Poland. The bursts of hard brass predicting the ensuing battle when Bulba executes her son were loud enough, if lacking in any particular shrillness. The melancholy returning oboe melody, reminiscent of earlier bliss, was evocatively played. Harsh staccato string tones, violent battle music and a high E-flat clarinet are among the dark scenes before the final movement, Death and prophecy of Taras Bulba. It’s a feast for the brass, with fanfare-like figures and bells giving voice to Bulba’s triumphant prophecy before her capture and disappearance. The Poles’ grotesque dance kept a tight ensemble, with the great sonorous sounds of bells, organ and brass representing Bulba’s triumphant death. The performance presented the narrative aspect of the work, but greater urgency in dynamics and attack might have given the goosebumps essential to this rhapsody.

Described as “evocative and dramatic”, this program of rhapsodic music from the West Australian Symphony Orchestra certainly delivered, with works ranging from the familiar to the vibrant and new, and a well-deserved welcome for conductor Johannes Fritzsch at the end.