The Australian Brandenburg Orchestra Christmas ! Christmas ! is an annual event presenting a festive music program mixing the traditional with the contemporary and the sacred with the profane, where Billy Joel meets George Frideric Handel. It is a musical assortment that appeals to a large church and complements, or for some supplants, the more traditional sacred festival of the nine lessons and songs.

In Sydney, the public is masked and the concert lasts 80 minutes without an intermission. We are given a race sheet but the full program is only available for download. Border closures require the absence of some key orchestra members; others have just escaped interstate blockages – signs of the times, despite which artists and audiences are clearly happy and grateful to be lifted by the event.

Directed by Artistic Director Paul Dyer, without harpsichord, the 17-person orchestra, which plays on period instruments, is joined by 19 choristers, the alto section as always, composed only of countertenors. The lighting designer Alexander Berlage illuminates the festive scene by adapting to the different musical atmospheres of the evening.

In a world premiere, the ensemble’s four baroque trumpeters, led by the legendary Leanne Sullivan, play Fanfare by emerging Sydney composer Hugh Ronzani. It’s a pretty cameo, with the trumpeters making their statement from the gallery above the stage, supported by the timpani.

Choir and orchestra burst into the first of many Christmas carols, Listen ! The herald the angels sing. Few singers would realize that the melody of this classic was written by Mendelssohn. Column chords are sung like a chorale, with the last verse adorned with the immortal decant composed by Sir David Willcocks, without which no interpretation of this song is complete, sung by the powerful soprano section.

the Sonata Sancti Caroli, is a pastiche by Dyer, of two rarely heard instrumental sonatas, one by Rittler and the other by Biber. Dyer interpolated two movements, the Sonata and Allamanda, from a continuation of Biber to that of Rittler Sonata Sancti Caroli. The result is a vibrant piece that bubbles in the style of a dizzy chaconne where two first violins played by Matthew Bruce and Madeleine Easton engage in a “catch me if you can” style duet. 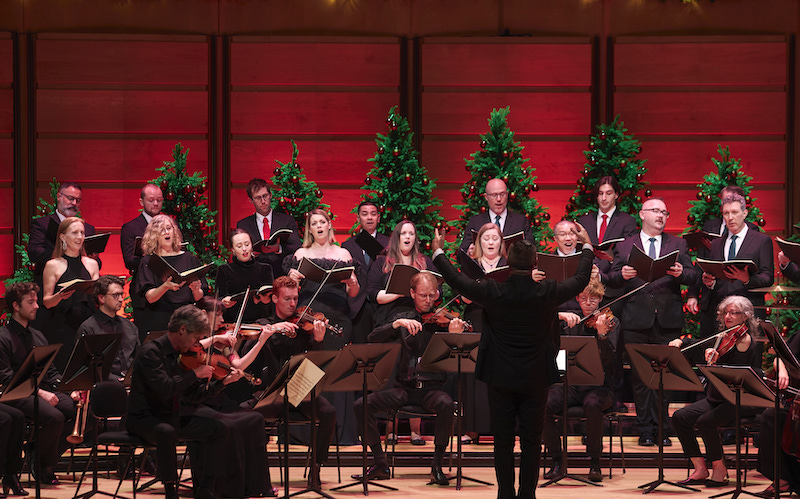 Norwegian composer Ola Gjeilo Prelude – Rejoice with joy is a delicious inclusion. Sung in Latin, the three lower parts provide a drone to the melody of the sopranos. Byrd’s place Mass for Five voices in this program is confusing. the Creed, which is the structural and compositional apex of this mass is omitted, leaving a sense of discontinuity, especially in a piece as familiar as this one. the Gloria is also omitted, probably because it is not sung during Advent. The program notes would have been a suitable place to explain these decisions, as well as a drawing note in the fine handwriting of the Agnus Dei. Nevertheless, the Kyrie, Sanctus and Agnus Dei are performed impeccably by experienced choristers.

A sound rendition of John Rutter’s Handel-inspired arrangement of Joy to the world leads perfectly into two popular choirs of Messiah. The coloratura is well maintained at the fast tempo and the dotted rhythms are clear. Billy Joël’s lullaby, arranged by former king singer Philip Lawson introduces support for the following a cappella chants – Far away in a manger, sung in long phrases with settling ornaments and a charming tenor solo by Daine Ellicott, Hall deck with its skillfully navigated modulations and The Carol of Coventry.

A piece by London-based Alex Palmer and two of his arrangements bring fabulous fun, humor and variety to the lineup. A sparkling Christmas ordered by Dyer for the 2018 Christmas ! Christmas ! Season, weave the themes of four favorite Christmas carols and turn them into a cheerful parody of rhythm and melody. Palmer worked his magic with his arrangements of O little town of Bethlehem with arrangement by Ralph Vaughan Williams transcribed for dead ends and baroque trumpets; and God rest you happy gentlemen, highlighting the section of strings in a quartet that includes violin (not “violine” as indicated in the program).

The final installment brings together the choir and orchestra for Rutter’s Carole of the Nativity, the immortal and bewitching Stille Nacht by Gruber sung in German, French and English and finally the Willcocks arrangement of Come, all you faithful with its own heavenly and incomparable descent.

There are a few distracting effects from the percussion part, but more distracting are Paul Dyer’s flamboyant movements which include podium jumps (eliciting laughter from the couple sitting across from me) and detracting from clear and concise musical direction. During the final song, he leaves the platform, turns around to close his score, and walks on the stage just in front of the orchestra, which must follow its peregrinations. The tactus is lost as well as the perceptible and coherent gestures.

The Australian Brandenburg Orchestra presents Christmas ! Christmas ! at the City Recital Hall in Sydney until December 15th and at the Melbourne Recital Center on December 18th.