A weekend of three significant first nights of opera, which also included Melbourne Opera Lucrezia Borgia and Victorian opera Il Mago di Oz, hopefully marked a change of fortune for Melbourne’s opera scene. It started on Friday evening with the revival of Elena Kats-Chernin’s first opera, Iphis, which draws on Ovid’s own reworking of a preexisting ancient Greek tale for his Latin narrative poem Metamorphoses in 8 AD.

It tells the story of a poor couple, Lidgus and Telethusa, who are expecting their first baby. Lidgus warns Telethusa that if the child is a girl, they will have to kill her, as they cannot afford the costs associated with bringing a girl to adulthood, such as a dowry. When Telethusa bears a daughter, the gods advise her to hide her sex from her husband. Iphis is therefore brought up as a boy.

The trick, however, works too well. Now a teenager, Iphis attracts the love of another girl, Ianthe, whose desire is soon passionately reciprocated. When a still-unconscious Lidgus suggests the two marry, the gods take pity on Iphis’ desperation at her plight and turn her into a man. Thus transformed, Iphis and Ianthe live happily ever after.

Notwithstanding these dei ex machine, Ovid’s poem offers a rare mythical portrayal of female same-sex attraction, and has been referenced and imitated in the literature of early modern Europe. The story only fell into obscurity in more recent times, when tropes of male heroism and heterosexual eroticism came to dominate the European literary imagination (and, indeed, the interest of opera librettists). 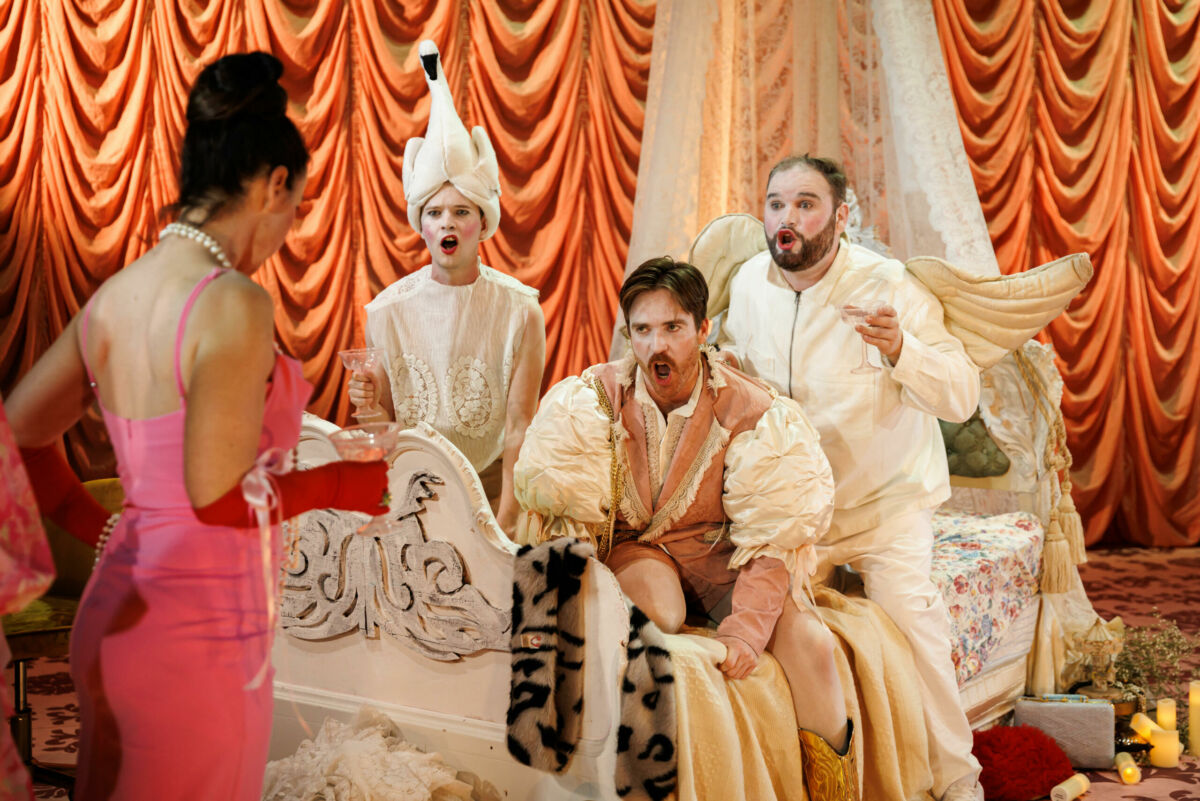 In a 1997 interview, given at the opera’s Sydney premiere, Kats-Chernin librettist and former composition teacher Richard Toop also observed that such “happy ending transformation, especially with the connotation that any type of potentially homosexual relationship has to be healed, immediately, even by divine intervention” no longer fits today’s audience. He opted for an ending instead, in which the gods impose multiple, inconclusive gender changes on the assembled crowd, essentially leaving them to choose a sexual identity for themselves.

The ensuing chaos serves Toop’s comedic purposes well. The opera he and Kats-Chernin developed from the tale is more of a satirical farce than a reverential classic tale. Toop emphasizes the history’s startlingly modern exploration of the performative aspect of gender identity. But the overall character of the libretto and score also presents challenges that speak to the very nature of opera; how to build, even stage, a drama that is nonetheless driven by and through music. These are challenges that the work and this staging only partially overcome.

Musically, the 70-minute score employs a nine-piece chamber orchestra (flute, clarinet, percussion, piano and string quintet) to craft a fast-paced tonal score that draws unabashedly from the cabaret traditions of Weimar Germany. and early 20th century jazz. , as well as Latin American dance and klezmer styles. Skillfully produced by a young ensemble, skilfully led by the Lyric Opera’s artistic director, Patrick Burns, it has however lost a certain definition due to the overly generous acoustics of the venue – a renovated parish hall. Since there was no pit, the instrumentalists were placed onstage along its left side, and the sound tended to be somewhat noisy. As for the score itself, engaging musical ideas abound but rarely have the time or space to settle or develop into longer musical structures. As a result, the work is more like a long recitative. 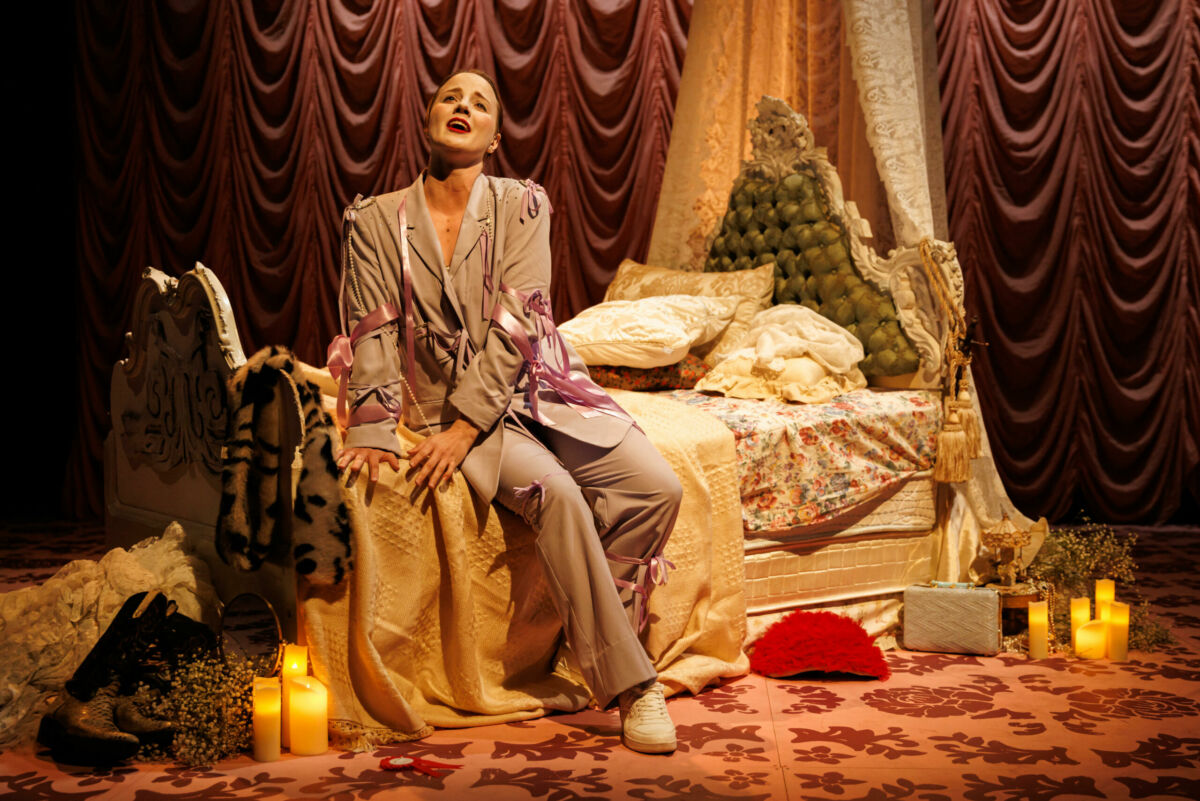 The booklet is also probably too busy. An operatic comedy will always unravel if it is made to run almost at the same pace as a spoken word comedy; a risk amplified here by the fact that many actors also struggled with clear diction. A notable exception was tenor Douglas Kelly (Lidgus), whose clear, confident tenor voice rang true throughout. Nevertheless, the entire cast is to be congratulated for its obvious commitment and its high level of musical preparation on the bill. Morgan Carter (Iphis) and Breanna Stuart (Ianthe) were a good match as the destined couple, and Nicole Wallace (Telethusa) was a strong and charismatic presence as a mother. Timothy Daly (God 1) and Troy Castle (God 2) provided a nice comedic flick as mischievous deities, though they were somewhat hampered by being placed in the back of the stage.

They also had the most effective costumes (designed by Brynna Lowen), simple and iconic. I wondered if such a minimalist approach would have worked better across the board, and also allowed lighting designer Richard Vabre to do more. With so much in the booklet, there was little need for additional visual cues. Indeed, the strongest scenic elements, such as the representation of childbirth, were also the simplest. Likewise, Katy Maudlin’s conducting was at its best when the libretto and score had space to do their thing. More could have been done with less at all levels.

It so happens that the Victorian Opera’s Il Mago di Oz, which opened at the Théâtre du Palais the following evening, proved to be an example of how a librettist and composer can effectively extract mythical content from an otherwise wordy and otherworldly original tale, and find true pathos in comic moments. Nonetheless, Lyric Opera of Melbourne is to be commended for giving audiences the opportunity to experience and engage with this important work.

Lyric Opera of Melbourne presents Iphis at TheatreWorks through September 3.