“At its heart, chamber music is the art of dialogue and conversation, sometimes witty, scintillating and entertaining, other times profound, deeply moving and full of drama,” writes Claire Kilgariff, Artistic Director of Arafura Music Collective, in the program of the NT Chamber Music Festival.

The notion of dialogue, listening and voice was highlighted in a fascinating way in the varied program of the NT Chamber Music Festival, which took place from June 4 to 5 in Darwin, and showcased the diversity and the beauty of the chamber music repertoire. A joint venture between the Darwin Symphony Orchestra (DSO) and the Arafura Music Collective in association with Brown’s Mart, the festival bears witness to the growing enthusiasm for chamber music in the Northern Territory.

The weekend began with an unexpected highlight, the NT Composers Seminar. Far from being an abstruse discussion of composition, this delightful event featured three new works by NT composers – Netanela Mizrahi, Nick Yates and Francis Diatschenko – specially commissioned by DSO. Beautifully performed by a talented ensemble of musicians drawn from DSO’s regular musicians and three guest artists – Ioana Tache on violin, guest violist Sally Boud and Distaschenko on guitar – each piece was remarkably different in style and influences, revealing the breath and diversity of new music. emerging from the NT.

Influenced by his experience playing in popular music groups, Diatschenko’s work, Transparent, was performed in an arrangement for strings and guitar, a somewhat unusual combination for classical chamber music. Diatschenko’s composition is beautifully fluid and simple, and she demanded admirable restraint from the string players to let the unamplified guitar be heard. It was, as DSO principal cellist Michael Bardon pointed out in the discussion following the performance, both an exciting opportunity to explore different bowing techniques and an exercise in listening and empathy. .

Next comes the harmonically sophisticated piece by Nick Yates, repressed, who explored the pentatonic scale in an original way. Moving rapidly between keys changing a note of a pentatonic scale, the effect of this composition was akin to a kaleidoscope, ever shifting and changing color, without settling on an original key. This did not, however, create a sense of unease; instead, he created a harmonic play, a sense of exploring possibilities. Again, the post-performance discussion illuminated the conversation that took place between the instruments. Written for clarinet and strings, the string instruments, Bardon explains, this time strive to capture something of the timbre of the clarinet, which, depending on the performer’s breath, comes close to the human voice and singing.

Finally, the breathtaking new work by Netanela Mizrahi, listenings, took the concept of dialogue and listening beyond the theater and into the world. Originally composed in 2020 for Young Adelaide Voices, Listening was inspired by the voices of young people speaking out on issues of global concern. According to Mizrahi, the piece seeks to amplify these voices too often marginalized in our society. Beginning with a slow, plaintive clarinet, the work quickly brings the instruments together in a rhythmic, playful crescendo that evokes voices coming together in solidarity.

Giving viewers the opportunity to experience the inspiration behind the pieces and the compositional process was a warm and generous invitation to the musical dialogues that unfolded on stage and set the tone beautifully for the rest of the weekend, which also included two complete programs of chamber music concerts and showcase of young artists.

The first of these concerts, divine feast, presented a varied program of works by Martinů, Bryars and Tchaikovsky. Martinů’s irony The cooking magazine was performed with the liveliness and playfulness required of a play about a Shakespearean love triangle between kitchen utensils.

This was followed by another festival highlight, a deeply moving performance by Bryars The blood of Jesus has never failed me. Composed in 1971, this renowned work includes a recording of a homeless man singing a religious song, The blood of Jesus has never failed me yet, played on a loop with gradually evolving orchestral accompaniment. Having only listened to recordings of this work before, I must say that experiencing it live was a revelation. The restraint of the musicians on stage as they accompanied this voice – which would normally be forgotten or overlooked, but which took center stage here – and the sensitivity with which they articulated subtle musical textures, gave the piece a dignified gravitas. of a hymn. The old man’s voice became an expression of faith of sorts. As her wavering voice slowly faded, there was an almost reverent silence in the theater before the crowd burst into enthusiastic applause. 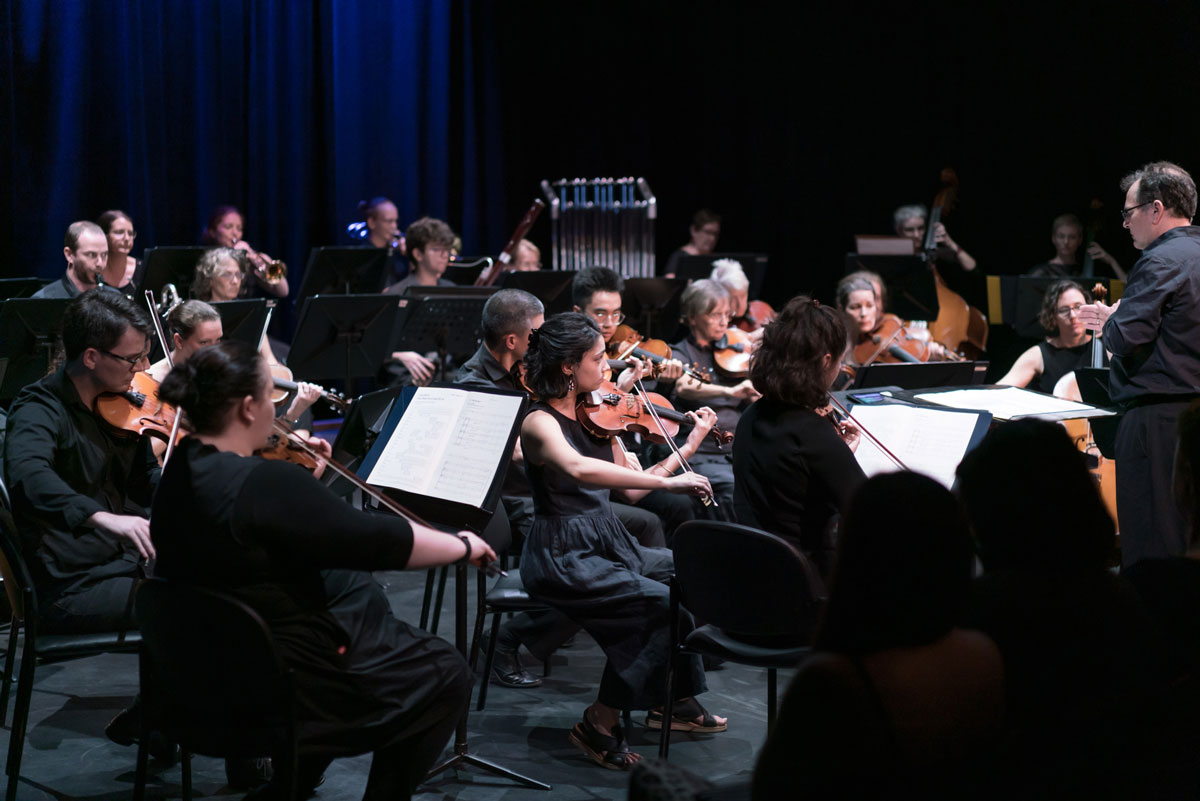 Interpreters of the work of Gavin Bryars. © William Carroll

The evening of fine music was concluded with a passionate and lyrical rendition of Tchaikovsky’s beloved work Souvenir from Florence.

The second gig, black dogs, has also presented a varied repertoire of chamber music, ranging from baroque to contemporary. Two pieces from very different eras, Tango Suite – an arrangement of tangos by contemporary composer Joshua Davis – and Richard Strauss’ Suite in B-flat for 13 wind instruments, showcased the brass and woodwind talents of the DSO and the Arafura collective. A sparkling rendition of Teleman’s Concerto grosso for two flutes, bassoon, string orchestra and basso continuo brought back the idea of ​​a conversation, this time between the solo instruments and the rest of the chamber orchestra. Performed with vivacity and elegance, this show captured the marvelous contrasts and confluences between virtuosity and accompaniment, simplicity and complexity.

The weekend ended with an extraordinary performance by West Australian composer Iain Grandage black dogs. Inspired by the unknown and unknowable workings of the mind, which became apparent to Grandage when two of his friends went through a period of mental fragility, black dogs aims to capture the experience of depression, a state that is notoriously difficult to articulate. To achieve this, Grandage wrote the guitar as the lead vocal, which he describes as “spirit, introducing matter”, which is then distorted, refracted and amplified by the string quartet. The result is astonishing, a musical interpretation of the fighting spirit, falling into the abyss of a hall of mirrors, coming together and then collapsing. This stimulating piece was performed with exquisite virtuosity and passion by violinists Ioana Tache and Erin McCann, violist Sally Boud, cellist Jonathan Tooby and guitarist Francis Diatschenko. A brilliant finale to a wonderful weekend of chamber music.