It’s not perfect – no production ever is – but Verdi’s masterpiece feels boldly new again in this vivid rendition from Melbourne director Sarah Giles.

In her own words, Giles took a feminist perspective on La Traviata, saving Violetta from the age-old attitudes that regard sex workers with a mixture of fascination and condemnation. The power of the Violetta that we encounter in Giles’ production therefore does not emanate from What she is only who She is.

Verdi was revolutionary in centering his opera on a prostitute, portraying her dispassionately for maximum effect on his affluent audience. But Giles emphasizes even more the emotional determination of the fragile Violetta, who despite the disappearance of her physical being (from tuberculosis) nevertheless persists forever in her mind.

Spoiler alert here, but be sure to watch what happens at the very last moment, as it’s the director’s most creative touch. After a lengthy death scene in typical Italian operatic fashion, another character quickly moves across the stage to take Violetta’s place on her deathbed as Violetta herself rises and ethereally walks away towards the tree of eternity. Top tip: Bring a box of tissues.

The slight annoyances that one can have with this production are mainly questions of emphasis. Violetta, played beautifully by Lauren Fagan, is theoretically a victim who personifies the age-old idea of ​​the fallen woman, but ends up turning the tide and garnering sympathy from all who rebuke her. This production describes the trajectory extremely well. In the earlier scenes, however, in the first act, it doesn’t quite heat up: it’s the glittering evenings of high society and her retreat to the countryside with her lover, Alfredo. Although this may simply be due to the slight hesitations that may arise on opening night, the fabulous parade of arias that unfold in these scenes – all of Verdi’s finest – fell to some extent vocally inadequate. .

But by the jingo, it all took shape in act two, when the action begins in earnest. Fagan came through with emotional strength and bold singing of the highest order. A great wave of sympathy swept through the auditorium as she sang “Alfredo, you can’t fully understand the love I have in my heart.”

Kang Wang, who plays Alfredo, is considered a true Verdi tenor and a perfect fit for the role, judging every move with skillful precision; and despite the odd tense moment earlier, he also improved tremendously in the second act, especially when he loses his temper during a game of cards and falsely accuses Violetta of lying. When the two lovers finally reunite and reconcile after their confrontation, a flood of raw emotions flows.

James Roser makes a more placid and understanding Germont than is perhaps usually heard. As Alfredo’s father, he erects a harsh wall of authority as he tries to persuade Violetta to end the romance due to his family’s honor. In this production, Germont breaks down his barriers and perhaps sympathizes too easily with Violetta. But again, it’s a matter of emphasis: this production seems to purposely pay more attention to Violetta, and that makes it interesting.

The staging went off without a hitch on opening night, and there was great artistry in the sets, lighting, and costumes. The dividing walls served to separate the bedroom from the ballroom (there is a rather private and rather suggestive boudoir scene, so don’t bring your children), and these walls also accentuate the loss of communication when the characters are absorbed in their own thoughts and fail to listen to another.

Sometimes the whole cast stops frozen or moves in slow motion as if they were taking a picture: the look is superb and it is impeccably realized. Flowing ball gowns and elegant tunics, inspired by the designs of Charles James and Christian Dior, are lovely. 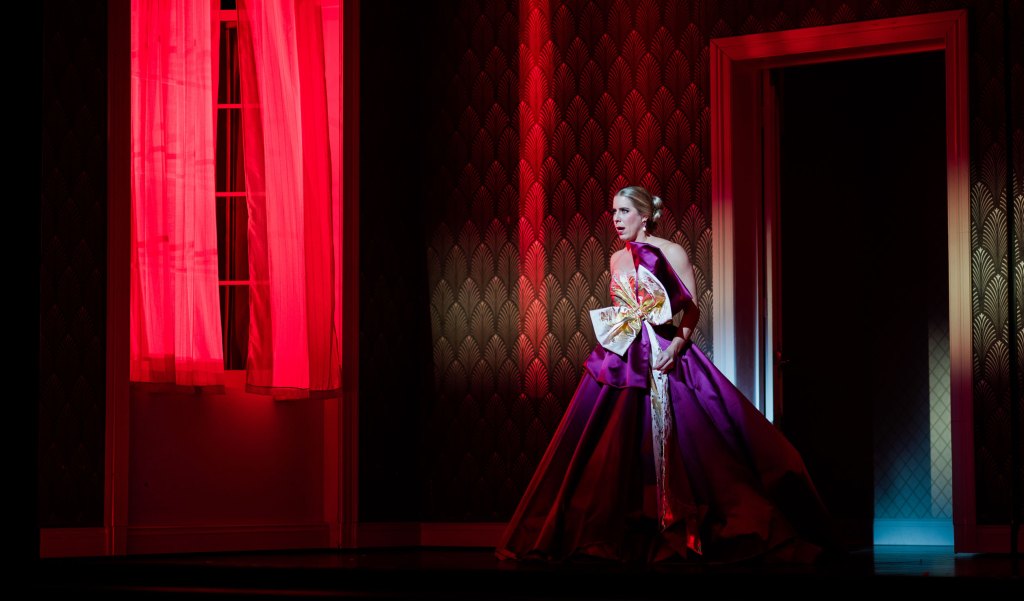 The supporting characters are all skillfully sung and the choruses deliciously crisp. Pelham Andrews (as Baron), Cherie Boogaart (Flora, another courtesan) and Mark Oates (Gastone) are very memorable; Jeremy Tatchell, Teresa La Rocca and Conal Coad are also excellent. Two dancers put on a little show in a terrifyingly entertaining second-half show when Flora throws one of her most tumultuous nights.

Oliver von Dohnányi conducts the Adelaide Symphony Orchestra with a steady hand. Without pushing things, he gives primacy to the voices and allows them a full, natural flow that makes Verdi the best. The stabbing death music at the end is perfectly timed and really puts a sip in your throat.

Your support will help us continue the important work of InReview in publishing free professional journalism that celebrates, questions and amplifies the arts and culture in South Australia.