Celebrating its 75th anniversary this year, the Queensland Symphony Orchestra (QSO) was born on March 26, 1947, giving its first concert at Brisbane City Hall under guest conductor Percy Code. Much has happened since that defining moment for music in Queensland and the QSO is now the largest and most important performing arts company in the state. Having recently survived the worst perils of COVID, he certainly has a lot to celebrate.

This free birthday concert was presented in association with the Queensland Performing Arts Center (QPAC) and supported by Brisbane City Council. Guy Noble led the first four items of the program, starting with FireSean O’Boyle and William Barton’s fourth movement of the emotional Concerto for didgeridoo. The heightened sense of urgency and danger that begins Fire is both prescient and very charged. Chris Williams’ didgeridoo evoked this frightening universe, strongly supported by brass and percussion. Williams played a glorious solo, the rich tone of his instrument producing musical images of the earth, notably creating the burning bush and the frightened sounds of birds and animals. Intensely and beautifully played, it reminds us all of too recent events.

It was followed by a piece played at the opening concert in 1947, Berlioz Hungarian March of his opera The Damnation of Faust. With elements of an operatic overture, sweeping style and with full orchestral strengths, Hungarian march is based on a lively folk tune, still popular in Hungary today. With its rhythmic melody offering a strong contribution from the brass, it was well played by trumpets and trombones.

A longtime member of the QSO, cellist Craig Allister Young, was commissioned by the QSO to compose a Queensland Symphony Orchestra seventy-fifth anniversary marching band. Performed earlier in the year and recorded in March 2022, it is a festive and joyful piece. Young describes wanting to highlight the work of his colleagues with a hard-hitting and very loud piece; he seems to have succeeded. Opening with festive fanfares from timpani and trumpets, it was followed by a slow movement showcasing oboe, flute and harp. Rumbling strings led to a huge orchestral crescendo, then a slow section of a lovely French horn solo with obligatory flute and oboe. Driven by powerful bassoons and basses, the Fanfare eventually reached an extremely loud sonic cacophony with a climactic finale. A dynamic work with beautiful colors and a wide variety of sounds, it was well received although, surprisingly, there was no cello solo.

In recognition of the QSO’s work as a pit orchestra for the state opera and ballet companies, Tchaikovsky’s famous Act IV finale Swan Lake has been presented. One of the most romantic pieces of music ever written, it is painfully beautiful. The dramatic and emotionally charged music was generally well played, though taken at dizzying speed, the oboe’s dying swan followed by fierce violins detracting from the fast, expressive string melodies. 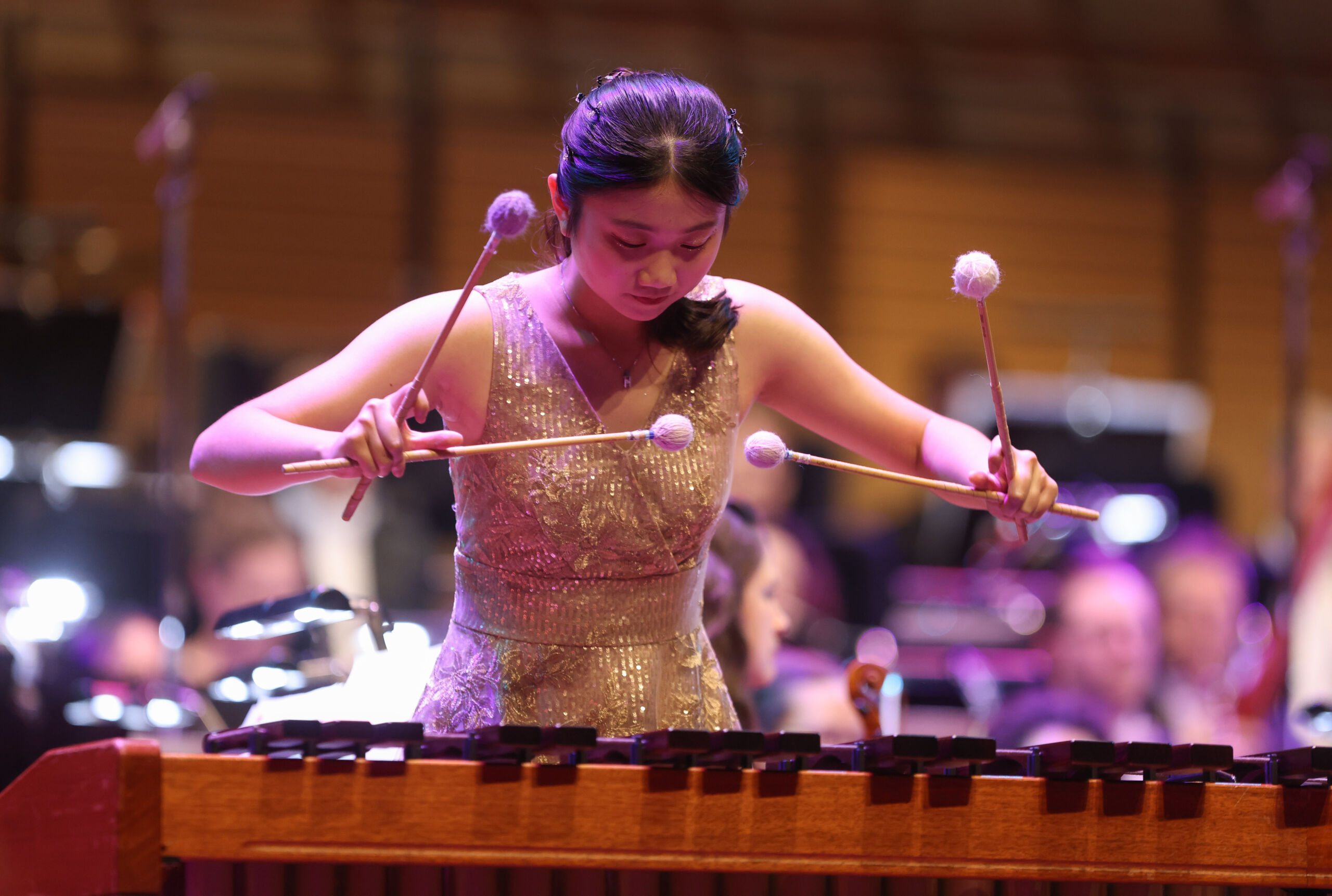 Principal Conductor and Artistic Advisor Johannes Fritzsch led a performance by QSO 2022 Young Instrumentalist Award winner, percussionist Chantel Chen, who featured an excerpt from Keiko Abe Prism Rhapsody for marimba and orchestra. Still a high school student, Brisbane-based Chen gave an absolutely astonishing performance, her technical ability and skill on the marimba of a very high standard and quality. Confident and competent, she balanced a delicacy of touch in the slow and light sections while unleashing the speed and agility required in the fast sections. His solo offered a contemplative, heavy voice that gradually increased in intensity, delivered with an emotional intelligence that seemed far beyond his years. Fritzsch conducted with great attention to detail, while the orchestra was energetic and passionate. She received a standing ovation and applause from the Orchestra.

The final work was one of the QSO’s signature works, Respighi’s Pines of Rome, which is an orchestral and audience favorite and a terrific piece to finish. A symphonic poem in four movements, the Villa Borghese was bright and energetic with beautiful horn playing and sparkling strings. The slow dark movement of catacombs offered a sad trumpet solo perfectly rendered with dramatic strings and brass. The silver harp took on its full meaning in the Janicolo movement, with a lovely clarinet solo, followed by flute and sweet strings, deliciously played. The final Via Appia with the haunting drumbeats of the marching Roman army, brought out a perfect English horn, bassoon and horns on stage. Adding trumpets in the auditorium and the organ aloft, the full orchestra, with noisy brass and percussion, rose to a frenetic orchestral ending, which was brilliantly played under Fritsch’s expert direction.

Whereas Pines of Rome helped achieve a pleasant and exuberant finale, it was the only substantial piece of music in the concert. We needed more work of this quality to show just how wonderfully capable this orchestra is. While some program choices clearly made sense historically, overall it wasn’t an engaging, thoughtful program to celebrate 75 years of continuous musical creation. 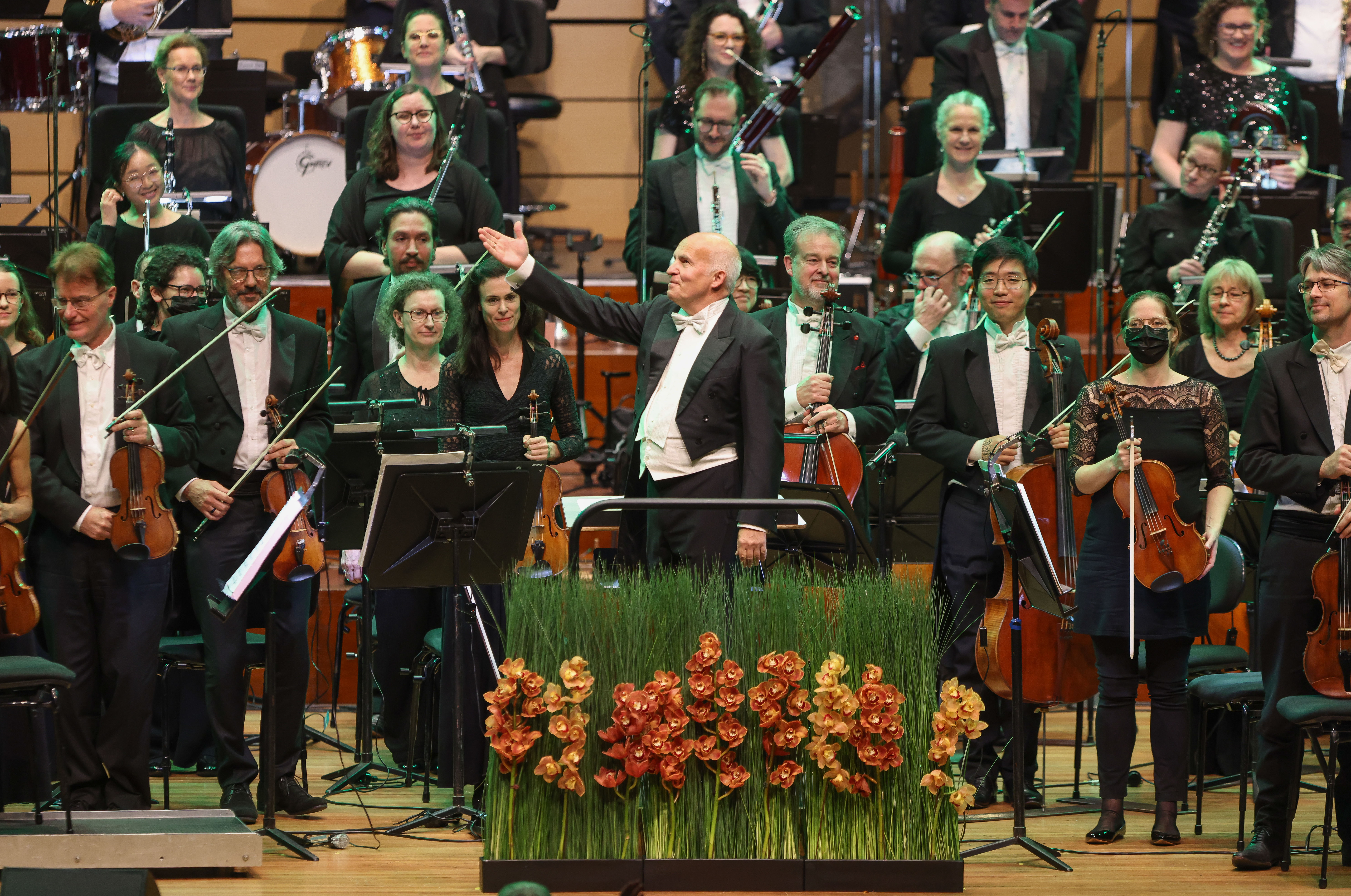 Genevieve Lang hosted the evening, carrying out a few ad hoc and superficial interviews, while presenting the pieces of the program accompanied by videos and slideshows. For the most part, these slides weren’t engaging, although more videos of the quality of the one on regional QSO activities would have been welcome. Video messages from VIPs who were not present were uninteresting and seemed to lack authenticity.

The gig lacked a strong directing hand to bring it together in a polite and professional manner, with a concept of the messages it wanted to convey. As presented, it was actually a hodgepodge of bits of information, giving little meaning to the QSO’s past and future destination. It could not be left to the printed program alone to explain the past. Unfortunately, this level of presentation lacked sparkle and party magic, while simply tossing balloons around the auditorium as the finale didn’t create a satisfying evening.