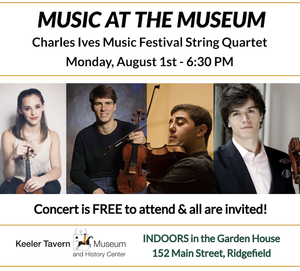 FREE concerts in Ridgefield during the month of August

Music at the Museum, Charles Ives Music Festival String Quartet on Monday August 1 from 6:30 p.m. (in the KTM&HC Garden House)

Free concert for the community at the Ridgefield Playhouse on August 7, Charles Ives Music Festival featuring musicians and WCYO students

And save the date – Monday, August 15 (6:30 p.m.) for the next performance of Music at the Museum with Harmonia V Woodwind Quintet – back by popular demand!