The young cast performed honorably in the Charleston Gaillard Center, a friend of the singers. Tenor Matthew White and soprano Lauren Michelle sang Rodolfo and Michelle, respectively. Michelle’s voice is sometimes unstable but has a wonderful ability to expand. Soprano Brandie Sutton was a radiant Musetta. Troy Cook was an excellent Marcello.

To resolve the confusion of reverse order and pose probing questions, a talking character, the Wanderer (another nod to Wagner) was added, played with dignity by opera veteran George Shirley.

It was a great night for the festival orchestra thanks to the propulsive direction of Kensho Watanabe, who somehow created a powerful sound without ever overwhelming his singers.

A project by tenor Karim Sulayman, “Unholy Wars” is a pastiche opera, assembled with excerpts from nine baroque works. Original music by Mary Kouyoumdjian brings it all together.

There is a substantial body of Baroque opera and concert music dealing with the Crusades, again from a European Christian perspective. Sulayman has chosen some of the most sublime examples and, by arranging and staging them with video productions and dance, uses them to show the Arab point of view, as well as a strong anti-war message.

Three of the excerpts were written by Claudio Monteverdi, and his staging of the story of Tancredi and Clorinde became the heart of the evening. Tancredi, a Christian knight, was in love with Clorinde, a Muslim warrior, whom he unwittingly killed in battle, not recognizing her in the darkness under her armor. Shorn of Clorinda’s deathbed conversion, superbly choreographed (by Ebony Williams, with Coral Dolphin as double dancer), and performed in front of video projections of a burning Jerusalem (by Kevork Mourad), is a powerful piece of theatre. It would have resonated at any time, but images of war have a special power right now.

The final and most familiar excerpt, “Lascia ch’io pianga” from Handel’s opera Rinaldo, ends with “in my suffering I pray for mercy”, a prayer that echoes after this meditation on “war holy”.

Kouyoumdjian’s interstitial score, all pre-recorded, makes effective use of drones and music theory.

The production, by Kevin Newberry, used ropes to delineate boundaries and illustrate entanglements, both romantic and violent. Kevork Mourad’s projections often used cartoon-like designs of ancient Middle Eastern cities as they were built, reduced to rubble and rebuilt.

Sulayman is a superb tenor, with natural warmth and tenderness but the ability to project harsher emotions. The female roles were performed by Raha Mirzadegan, who has a supple soprano voice well suited to the Baroque repertoire. They were joined by bass-baritone John Taylor Ward. Ward is quite young, tall and striking, with a distinctive and powerful sound. All three singers were extremely efficient dancers, constantly on the move with Dolphin.

An eight-piece ensemble of period instruments was expertly led by Julie Andrijeski, who also played the violin. The famous acoustics of the Dock Street Theater created a musical feast. 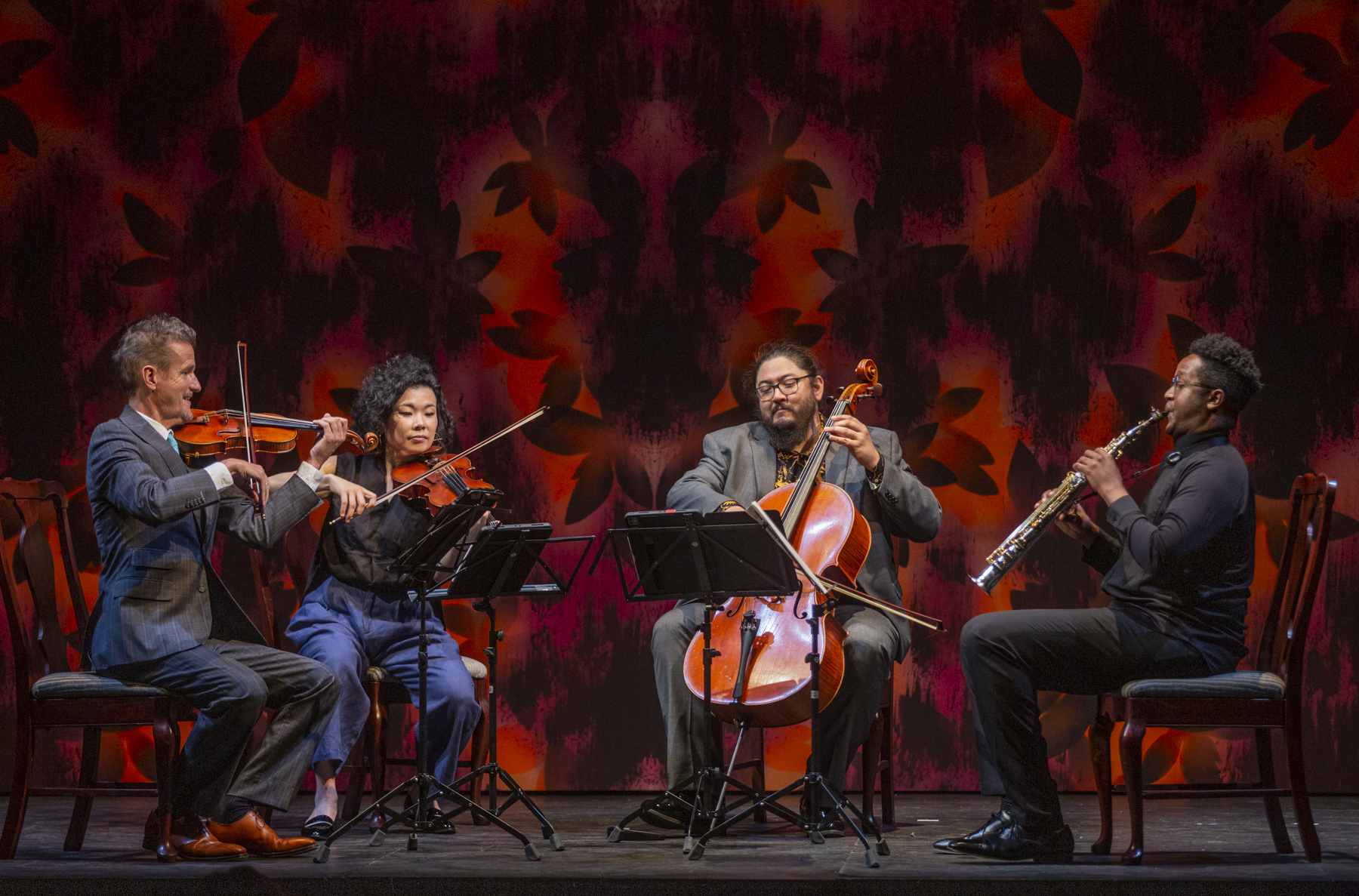 The chamber music lineup here alone would make for one of the best chamber festivals in America. While this year’s lineup seemed to have fewer big-name artists, it made up for that by introducing new ones with a series of carefully curated concerts, each featuring “something old, something new.”

As usual there are 11 programmes, each repeated 3 times, all in the Dock Street Theatre. The first of these – the only one I could hear – was to open with the String Quartet from Richard Strauss’ opera, “Capriccio”. Viola player Leslie Robinson couldn’t perform due to illness, so we had Mozart’s Oboe Quartet with a twist: instead of an oboe, we had Steven Banks, who played the oboe part on his tenor saxophone. The effect was dazzling: the brighter, more resonant sound of Bank’s instrument was utterly captivating. The ensemble included Geoff Nuttall on violin, Ayane Kozasa on viola and Paul Wiancko on cello.

Kozasa returned with Wiancko to perform a more recent work, Caroline Shaw’s “Limestone and Felt”, a cello and viola duet that alternates between pizzicato and bowing to suggest the acoustic effects of various surfaces on different sounds, proceeding in an arc of discovery.

In the finale, the excellent St. Lawrence String Quartet performed Mozart’s String Quartet in E flat major, with Kozasa replacing Robinson. Nuttall, the ensemble’s first violinist, also “hosts” the chamber music programs here, which involve a fairly broad comedy routine. For example, this program included a game, originally part of the festival’s outreach to local schoolchildren, where the audience was asked to shout out composition topics that were listed on a tablet. The musicians then conferred and improvised, leaving it up to the audience to guess which of the suggestions they had just performed. It was entertaining, but with the jokes and other schtick, it all took up maybe a third of the total concert time. Sometimes it’s better to just play music, especially with such gifted artists.

The Spoleto Festival, which also includes theatre, dance and jazz, among other performing arts categories, continues uninterrupted until June 12. Some events may be sold out, but most are still available. For full schedules and ticketing, go to Spoleto website.

ArtsATL (www.artsatl.org), is a non-profit organization that plays a vital role in educating and informing the public about the arts and culture of the metro Atlanta area. Founded in 2009, ArtsATL’s goal is to help build a sustainable arts community contributing to the economic and cultural health of the city.

If you have any questions about this or other partnerships, please contact Senior Director of Partnerships Nicole Williams at nicole.williams@ajc.com.