The Turn of the Nut (State Opera South Australia)

by Benjamin Britton The turn of the screw is a chamber opera, requiring just six singers and an orchestra of 13. A small, intimate performance of it can have a claustrophobic creepiness of its own. But this State Opera South Australia production, presented on the cavernous stage of the Adelaide Festival Theatre, gave the impression that there were bigger and darker forces at play than just human characters. If this is a story about innocence lost, in this story innocence never stood a chance.

“A mansion with evil within its walls, or a governess with evil in her mind?” the advertisements had asked us. This ambiguity is part of the appeal of Henry James’ famous short story, in which a governess is sent to a country mansion to care for two orphaned children, Miles and Flora, and begins to suspect that they are possessed. . The ghosts of Peter Quint, a former valet, and Miss Jessel, the former governess, become mysteriously linked to the two children – at least in the governess’s mind. But what is real and what is imagined? Britten’s opera makes it all real for the audience.

Upon entering the auditorium, one quickly became aware of Bly House’s dark Gothic interior revealed on the gloomy stage, dominated by four ominously oversized wooden paneled towers. Beams of light angled downward from above, illuminating nothing but an all-pervading haze. The mansion became a character in its own right, and the most dominant, its dark blocks of walls and huge rear window eclipsing the characters on stage and closing menacingly between scenes.

Roger Kirk’s set design was magnificent, as was Trudy Dalgleish’s lighting, allowing the two ghosts to enter and exit the shadowy void surrounding the stage. Apart from Peter Quint when he first appeared, the actors were never brought up and thus felt increasingly vulnerable in the vast space, the dark void on all sides. Even the minimal furniture—desk, piano, Miles’ bed—seemed tiny. The story is set in rural Essex, but the only signs of the natural world were a hanging bare tree branch and a lake of dead water that slipped in and out of place like a ghostly shroud. Even the daylight scenes were never lit except by a wintry twilight.

Kanen Breen gave a chilling performance as the unequivocally sinister Peter Quint. There was a subtle but lively edge to his voice, and he roamed the stage with an imposing presence. Hints of Quint’s predatory status were made uncomfortably clear, heightened by the “sad clown” effect of his thick red hair and darkened eyes. Written like that, it sounds too much, but Breen pulled it off superbly. Quint’s ghostly accomplice, Miss Jessel, was sung by Fiona McArdle with an equally masterful tone, only soft rather than harsh around the edges. 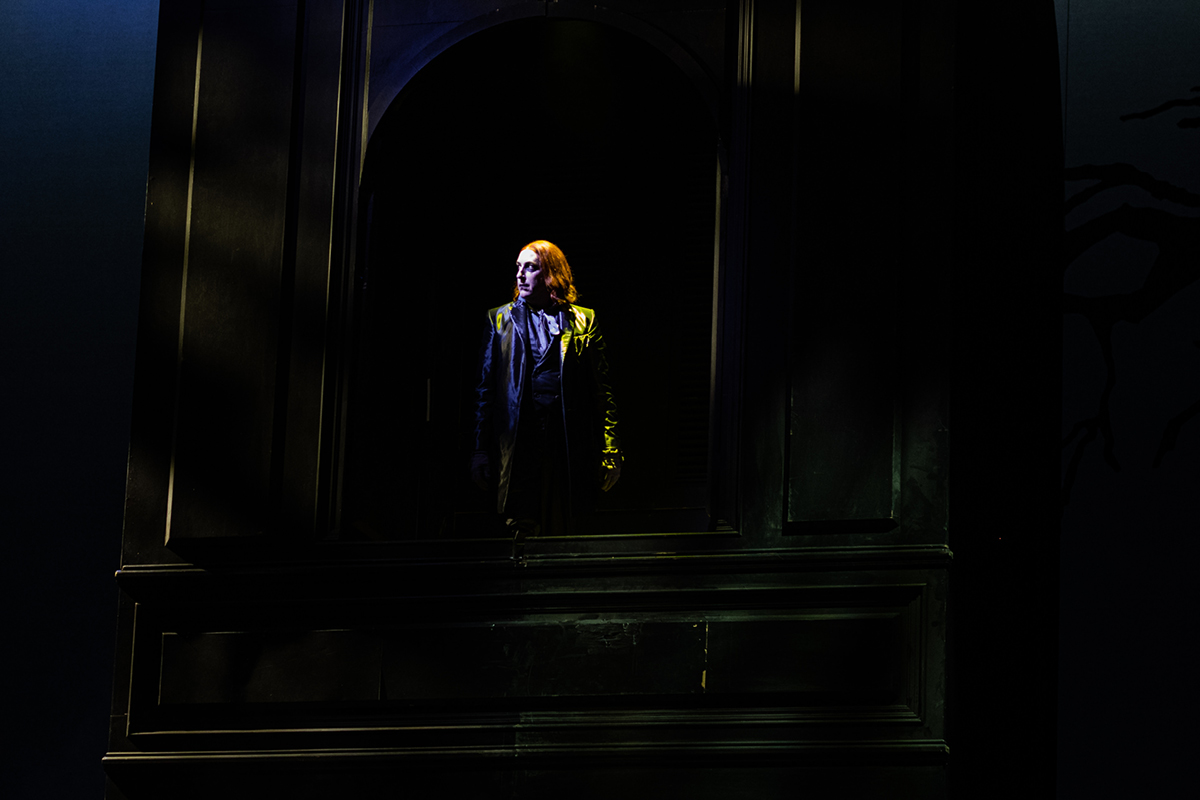 Kanen Breen in The Turn of the Nut. Photo © SodaStreet Productions.

Rachelle Durkin sang the governess superbly, her clarity of tone and diction making supertitles unnecessary for a while. But the natural confidence and charisma she brought to the role seemed at odds with the character she played: an overwhelmed young woman, torn between the desire to please and the fear of the supernatural. This may have been an attempt to avoid the Victorian stereotype of the “hysterical woman”, but this approach must also find a way to maintain the true horror of the governess’ loss of innocence.

Elizabeth Campbell’s deeper tone was perfect for Mrs. Grose, the housekeeper, a down-to-earth voice of reason.

The two children, Miles and Flora, were sung with great musicality by Max Junge and Eliza Brill Reed, both aged 12. rich, polished tone flowing through the orchestral accompaniment like an otherworldly instrument.

The 13-piece ensemble, made up of directors from the Adelaide Symphony Orchestra, was enthusiastically conducted by Paul Kildea. Yet their sound had the immediacy of chamber music, with well-felt rhythms, but also room to breathe. Highlights included Andrew Penrose’s incredibly expressive timpani playing and the dry, chilling sound Mark Gaydon got from his bassoon.

The staging left me on two heads. Director Stuart Maunder is clearly not afraid of emptiness or sluggishness, but it takes absolute commitment to work, and blocking at times felt a bit stilted and hesitant between sections. However, on several occasions, the near-stasis turned out to be frighteningly perfect, such as Miles’ creepy stare at the housekeeper to close out the first act.

Britten’s opera presents children not as real children, but as adult imaginings of children – mysterious and elusive in their innocence, if innocent. It seems none of the adult characters (ghosts included) really know what they really want or need. In this production, Flora and Miles appear not as puppets of the ghosts who supposedly possess them, but as automatons, strange and inscrutable. What marked the climactic ending as particularly poignant: Miles’ final act (which I won’t spoil) could be described as finally bringing him back to life.

South Australian State Opera The turn of the screw until May 6 at the Adelaide Festival Centre.