If you need confirmation of the opera’s ability to thrill and entertain on a grand scale, book yourself a ticket to Opera Australia’s Puccini’s Turandot, currently plays at the Sydney Opera House. It’s a breathtaking evening and a perfect antidote to those dark and pestilential days.

Graeme Murphy’s spectacular production of Puccini’s last unfinished work made its first release in 1990, what you couldn’t tell from this fresh revival, directed by Shane Placentino. Still a choreographer, Murphy draws inspiration from music, using highly stylized movement, tableau and gesture to tell an ancient Silk Road tale of a Chinese princess’s descent from imperious disdain to human love to hands of an impetuous foreign prince. Kristian Fredrikson’s captivating, lavish yet lucid set and costumes provide the perfect visual context for Murphy’s directorial vision. It was clear from the opening night performance that Placentino and his cast had prepared thoroughly, with an almost flawless revival staging.

In many ways, the chorus is the main character of Turandot, rising in unison to acclaim their Emperor and responding with simple humanity to the excesses of the larger-than-life Turandot and Calaf. As always, the Opera Australia Chorus didn’t disappoint, bringing weight where needed and subtlety whenever the score allowed (which isn’t often the case).

The slave-girl Liù, servant of the aging king of Tartery, Timur, is a plum role. Puccini gives him the chance to win the hearts of the public with his first act aria signore, ascolta before Timur’s son, Calaf, had time to impose himself and even before the icy Turandot appeared on stage. Soprano Karah Son enjoyed every moment with beautifully clear tone, strength and warmth. Of the three main solo parts, hers was the performance most in tune with Murphy’s direction. She teamed well with David Parkin’s Timur, full of dignity and pathos.

Tenor Yonghoon Lee, familiar to audiences at Opera Australia as well as many major houses around the world, was in fine form in the role of Prince Calaf. His commanding stage presence and vocal power are perfectly suited to the role and he handled his performance beautifully to ensure that the opera’s great moments were fully realized. (I was seated a few rows from the stage, and I don’t think my eardrums will ever be the same after his Nessun Dorma.) Lee directs a lot of his energies and attention towards vocals and optimizing vocal production, and one wishes he had a greater range of gestures and could fit in better stylistically with Murphy’s production, but this are quibbles in what was otherwise a very solid performance.

Soprano Lise Lindstrom is hugely impressive as the indomitable Turandot, and she managed to make the most of what is arguably a largely thankless title role. Its (literally) breathtaking entrance tune In questa reggia was full of steel and arrogance and she parried well with Lee’s Calaf in the enigma scene that follows. But it is in the last ten minutes of the opera (arranged by Puccini’s pupil, Franco Alfano after the master’s death in 1924), that Turandot’s impossible flip-flop from perpetual virgin to conquered lover occurs, that Lindstrom has entered hers. With a beautiful vocal and stage performance, Lindstrom had us suspend our disbelief, literally freeing us from the comic book surroundings of the set as he descended and revealed Turandot’s hitherto well-hidden capacity for human emotion. 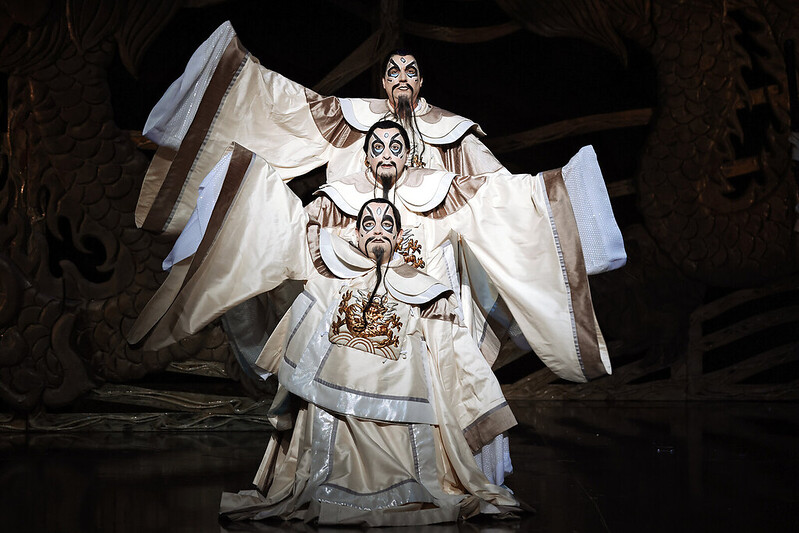 The three courtiers Pong, Pang and Ping (Virgilio Marino, Iain Henderson and Luke Gabbedy) have some of the most interesting and charming music in opera, mixing their voices in infinitely inventive ways as they lament their fate as as servants of a capricious princess. From time to time, one felt that the high quality of the vocal performances was jeopardized by the complexity and physical effort required by Murphy/Placentino’s management. It was a notable contrast to Calaf, who mostly had to stand there and sing.

puccini wrote Turandot for a large orchestra, with an exotic orchestration to reflect the oriental scenario. Under the clear but unobtrusive direction of conductor Renato Palumbo, the Opera Australia Orchestra provided colour, volume and style wherever required. We might have wished for a bigger brass section in the great moments of the opera, but according to the current funding arrangements, I guess we should be happy to have an orchestra.

The opening night audience was clearly grateful to have the opportunity to hear such a great performance. As the applause died down, a member of the audience behind me turned to his two grandchildren, possibly attending their first opera, to ask if they had enjoyed themselves. “Oh yes!” was the unequivocal answer. With discounted tickets available for most upcoming performances, perhaps Turandot is the perfect opportunity for you to present your grandchildren to the world of opera?